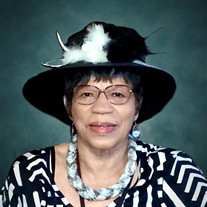 Barbara Elvira Anderson Posey, 76, of Owensboro, Kentucky went home to be with the Lord on October 12, 2017, at 4:00 P.M. She was born in Evansville, Indiana on September 7, 1941, to the late Steve William Anderson, Jr. and Earthine Leona Anderson; she was preceded in death by one sister, Mary Anderson Grant. Barbara was a graduate of Lincoln High School in Evansville, Indiana. She also attended Lockyear Business College in Evansville and Owensboro Business College in Owensboro. Barbara was a member of Fourth Street Baptist Church for over 50 years. She enjoyed participating and fellowshipping with her brothers and sisters in Christ. Her Sunday School couples class was unique because her husband was her teacher. She also enjoyed the Women’s Class. She was also a member of the Senior Choir, the Kings Daughters, Women’s Missionary Circle where she had served as Secretary, and the Usher Board. Recently she and her husband left Fourth Street Baptist Church and joined Zion Baptist Church under Pastor Larry Lewis. She was a member of the Owensboro Career Development Association where she served as Treasurer for nine years. She also along with her husband was one of the original founders of the Owensboro Career Development. She was a past member of Amaranth Chapter #46 for almost 25 years and past member of Daughters of Isis #68, also a member of NAACP. Barbara retired after 24 years with Bell South Telephone Company, and then worked for eight years in the Child Support Division for the Daviess County Attorney’s Office. She leaves to mourn her passing, her husband Unie Frank Posey of 57 years, and her children Deborah Posey Turner of Owensboro, Shanae Posey of Florida, David Posey of Owensboro and Trent Jackson of Owensboro. She was a proud grandmother of seven grandchildren and ten great-grandchildren, and several nieces, nephews, and cousins; four sisters-in-laws, Catherine Sanders, Sharon Douglas, Evelyn Crowe, Yvonne Wright, two brothers-in-laws, George Crowe and Miles Wright; one special cousin, Dr. Majorie M.”baby sis” Cabell

Barbara Elvira Anderson Posey, 76, of Owensboro, Kentucky went home to be with the Lord on October 12, 2017, at 4:00 P.M. She was born in Evansville, Indiana on September 7, 1941, to the late Steve William Anderson, Jr. and Earthine Leona Anderson;... View Obituary & Service Information

The family of Barbara Elvira Anderson Posey created this Life Tributes page to make it easy to share your memories.