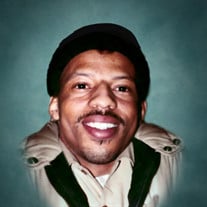 David Matthew Carter, 63, of Owensboro, departed this life on Sunday August 18, 2019 at the Heartford House. He was born in Henderson, KY. David was preceded in death by his father, Lenoard Frye and mother, Francele Carter; along with one... View Obituary & Service Information

The family of David Matthew Carter created this Life Tributes page to make it easy to share your memories.

David Matthew Carter, 63, of Owensboro, departed this life on...

Send flowers to the Carter family.