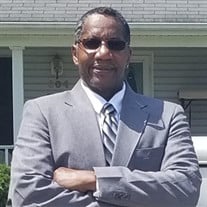 Eddie Clarence “Byrdman” Byrd, 62 of Owensboro, transitioned to his Heavenly Home on Thursday, March 24, 2022 at Owensboro Health Regional Hospital. Eddie entered this world on September 12,1959 in Boligee, Alabama. He gave the Lord his heart and the preacher his hand uniting and becoming a member of Fourth Street Baptist Church. He was employed for the past 16 years as a Cast Operator at Southwire-Kentucky Division. Eddie was a graduate of Owensboro High School and a former member of American Legion in Evansville, Indiana. He will always be remembered as a fashion icon with a confident walk that could not be duplicated. Eddie received pleasure and enjoyed the simple things of life; playing basketball and corn hole, dancing, exercising and spending quality time with his grandchildren. He was preceded in death by a mother he adored, Minnie Byrd, in 2020. He is survived, to cherish his memory and celebrate his life, by his wife, Charlene Byrd of Owensboro; father, Willie Byrd of Owensboro; sons, Clarence Byrd, Cameran Byrd and Carvarciea Byrd, all of Owensboro; daughters, Terrese Byrd, Moesha Byrd and Candace Byrd, all of Owensboro; sisters, Jennifer Byrd Taylor and Teresa Byrd, both of Owensboro. In addition to a plethora of family and friends. Celebration of Life services will be held at 11:00 a.m. on Saturday, April 2nd, 2022, at Fourth Street Baptist Church, 821 W 4th St, Owensboro KY 42301, with Pastor Mario Pearson, Officiant and Eulogist. Burial in Owensboro Memorial Gardens, 5050 KY-144, Owensboro KY 42303. Visitation will be at 10 a.m. until time of the services on Saturday at the church. Final tribute entrusted to McFarland Funeral Home, 1001 W 5th St, Owensboro KY 42301. Condolences and memories may be made online at www.mcfarlandfh.com

The family of Eddie Clarence Byrd created this Life Tributes page to make it easy to share your memories.

Send flowers to the Byrd family.