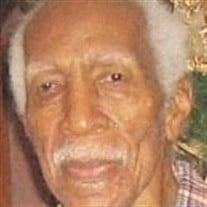 Elbert Washington Humphrey, 94 of Owensboro, entered this world on Sunday, May 13, 1923 to the parents of George and Linny Humphrey. He departed this world peacefully on Sunday, July 9, 2017 in the comfort of his home. He spent his childhood growing up in Livermore, Kentucky as the youngest of four children. His brother, George Humphrey and two sisters, Pauline Shields and Ruby Dymple Goatley all preceded him in death. He met and married the love of his life, Nancy Pearl Brown and the two were married for 70 years. He was his wife’s primary caregiver until she transitioned to eternal life on August 23, 2015. Also, he was preceded in death by his son, Garrett T. Humphrey, Sr. and his wife, Alice Humphrey and his grandson, John Lester Brown, III. Being an avid reader of the Messenger-Inquirer it afforded him the pleasure of discussing local and world news. Some of his lifetime hobbies included hunting, fishing, coin collecting, reading and hosting impromptu yard sales. He spent 39 years of his life employed in the Dietary Department of Owensboro-Daviess County Hospital and was a World War II veteran. He was baptized and became a member of Tenth Street Missionary Baptist Church. He leaves to cherish his memory and mourn his loss, two sons; Billy (Jean) Humphrey of Memphis, Tenn. and John Humphrey of Evansville, Ind.; two daughters, Beverly (Rev. Rudolph) Terry of Evansville and Belinda (William) Haliburton of Owensboro; eleven grandchildren; twenty-three great grandchildren; one special niece whom he loved like a daughter, Lelia(Joseph) Taylor; two nieces who unselfishly cared for him, Frances Magnum and Anna Green; a special caregiver and friend, Cindy Kelly and a host of cousins, nieces, nephews and friends. Burial with military honors by Fort Campbell Military and VFW Post # 696.

Elbert Washington Humphrey, 94 of Owensboro, entered this world on Sunday, May 13, 1923 to the parents of George and Linny Humphrey. He departed this world peacefully on Sunday, July 9, 2017 in the comfort of his home. He spent his childhood... View Obituary & Service Information

The family of Elbert Washington Humphrey created this Life Tributes page to make it easy to share your memories.

Send flowers to the Humphrey family.