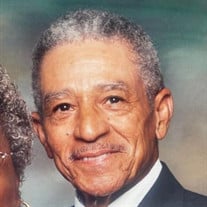 Elmo Griffith, Jr., 87, passed away on September 13, 2021, at his home, under the compassionate care of Hospice of Western Kentucky. He was born in Owensboro to the late Elmo Griffith, Sr, and Margie Render Griffith on October 4, 1933. Elmo was a graduate of the Class of 1951, from the historic Western High School (1904-1962), where he participated on the football and wrestling team. For the past ten years, Elmo served at Zion Baptist Church of Owensboro, as a member of the Zion’s Brotherhood. He was a prior member of Fourth Street Baptist Church for 40 years, where he served as assistant financial secretary and trustee, he was an Honorary Kentucky Colonel and he loved to fish. Elmo worked as a sanitation truck driver for most of his career with the Owensboro Sanitation Department, receiving a promotion to Civil Service Supervisor, where he troubleshot customer complaints for 5 years, retiring in 1987. After retiring, he earned the reputation of being a highly skilled interior house painter until his health began to fail him. Elmo was preceded in death by his parents, his sister, Agnes Griffith, and granddaughter Jill Hester. Elmo’s precious memories will be cherished by his wife, Merle Griffith; sons, Bruce Griffith (Antoinette Tillery), J. Wayne Griffith (Phoebe James); six grandchildren; 13 great-grandchildren; one great-great-grandchild; sister, Mary Calhoun, along with a host of nephews, nieces, cousins, and friends. Services are Thursday, September 23, 2021, 12:00 noon at Zion Baptist Church, 2311 W 9th Street, Owensboro, KY. Visitation at 9:00 AM Thursday at the church. All in attendance shall be in compliance with current health and safety directives with the wearing of protective facial coverings. Final Tributes are entrusted to McFarland Funeral Home. Condolences may be submitted online @ www.mcfarlandfh.com

Elmo Griffith, Jr., 87, passed away on September 13, 2021, at his home, under the compassionate care of Hospice of Western Kentucky. He was born in Owensboro to the late Elmo Griffith, Sr, and Margie Render Griffith on October 4, 1933. Elmo... View Obituary & Service Information

The family of Elmo Griffith Jr. created this Life Tributes page to make it easy to share your memories.

Send flowers to the Griffith family.