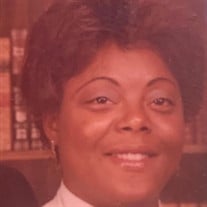 Evon Marie Collins Howard, 72 of Owensboro transitioned from her earthly home to her Heavenly Home on Thursday, March 4, 2021, at her home in the loving arms of her husband, Pastor George E. Howard. She was born October 12, 1948, to the late Hawes and Pauline Collins. She spent most of her childhood in Chicago, Illinois but returned to Owensboro and graduated from Owensboro High School. She graduated from Vincennes University with a degree in Cosmetology. She owned her own beauty salon and was an instructor at Vincennes Beauty College in Vincennes, Indiana. She had an entrepreneurial spirit and, also started her own housecleaning business. She enjoyed spending time with her grandchildren, sewing, crocheting, cooking, surfing the Internet, and watching movies, especially Westerns. She professed her hope in Christ at New Bethel Baptist Church in Evansville, Indiana. She served as the first lady at Faith Baptist Church in Vincennes, Indiana. At the time of her transition, she was a member of the Tenth Street Missionary Baptist Church. In addition to her parents, Evon was preceded in death by her two sons, Aaron Howard and Bruce Howard; one daughter, Cynthia Robinson, one brother, Jerome Collins, and two grandchildren, Devereaux Jennings and Beloved Daniels. Evon leaves to celebrate her life and cherish her memory, her husband of 53 years, Pastor George E. Howard; four children, Victoria Lynn (Darcell) Jennings and Odessa Denise Howard of Owensboro, Leslie (Jerry) Hunn of Henderson, and Danny (Von) Howard of Killeen, Texas; a sister, Vicky Collins of Brownsburg, Indiana and a brother, Hawes Jerry (Carolyn) Collins of Garden City, Georgia; an aunt, Bessie Mae Newton; 17 grandchildren and 26 great-grandchildren along with a host of nephews, nieces and other relatives. The number of those attending the visitation/service shall be within the current health and safety directives. All in attendance must wear personal protective masks.

Evon Marie Collins Howard, 72 of Owensboro transitioned from her earthly home to her Heavenly Home on Thursday, March 4, 2021, at her home in the loving arms of her husband, Pastor George E. Howard. She was born October 12, 1948, to the late... View Obituary & Service Information

The family of Evon Marie Collins Howard created this Life Tributes page to make it easy to share your memories.