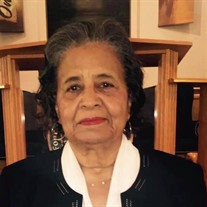 Florence Marie Jackson Tapp went home to be in the presence of our Lord on January 19, 2021. She accepted our Lord and Savior and was baptized at Fourth Street Baptist Church on April 21, 1940. In her younger years, she was a member of BTU, the Baptist training union ministry in the church. She also served as one of the lead culinary staff members for several years. She was born to James A. Jackson Sr. and Fannie Barker Jackson in Owensboro, on December 18, 1929. She attended Western High School in Owensboro and graduated from Central High School in Louisville, Ky. She retired from General Motors Acceptance Corporation in Owensboro. She said her favorite past time was cooking “huge " Easter and Thanksgiving Dinners, and watching the happy and smiling faces of her family. Even on her birthdays, she was passionate about cooking her birthday dinners and that she had enjoyed celebrating her birthday dinners with family. She was preceded in death by her parents, her husband of 34 years, James R. Tapp, her two daughters, Florence Helena Deal Davenport, and Vicki Lorraine Deal, two sisters, Anita L. Owsley, and Marietta Margaret Jackson, stepson, Rashad Majeed, one grandson, Morris Eugene Orlando Stewart, one granddaughter, Sara Marie Deal Jones, two sons-in-law, Jerry Davenport, and Marshall Stewart. She leaves to cherish her memories three children, Janet Deal Stewart, Eugene (Loretta) Deal, Jr., Cynthia (Rick) Deal Merriwether Evansville, Indiana, three stepchildren, Rodney V. Tapp of California, Tonia Rashid of Lexington, Lynn (Sherry) Tapp of Owensboro, one sister, Ina Jackson Carter, one brother, James A.(Marilyn) Jackson of Houston, Texas, one brother-in-law, Linford Tapp of Ohio, nine grandchildren, 15 great-grandchildren, two great-great-grandchildren, five step-grandchildren, four step-great-grandchildren, several nieces, nephews, cousins, and friends. The number of those attending the family private funeral service for Mrs. Tapp shall be within current health and safety directives. Final tribute entrusted to McFarland Funeral Home, Inc. Condolences may be made online at www.mcfarlandfh.com Special thanks to Adela Cooper, Service is Live Streaming on Fourth Street Baptist Church’s Facebook Page.

Florence Marie Jackson Tapp went home to be in the presence of our Lord on January 19, 2021. She accepted our Lord and Savior and was baptized at Fourth Street Baptist Church on April 21, 1940. In her younger years, she was a member of BTU,... View Obituary & Service Information

The family of Florence Marie Jackson Tapp created this Life Tributes page to make it easy to share your memories.

Florence Marie Jackson Tapp went home to be in the presence of...

Send flowers to the Tapp family.