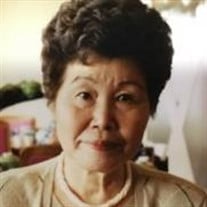 CELEBRATION OF LIFE Fusae “Sy” Jeffries November 24, 1931 to March 11, 2018 Memorial at Heritage Fellowship Church Reston, VA Fusae Fujihira Jeffries, 87, was born in Yokohama, Japan on November 24th, 1931, the eldest of 6 children. A survivor of World War II, Fusae met U.S. Navy Sailor, Mahlon “Jeff” Russell Jeffries in 1954 while working at the Navy base in Yokohama. Following their marriage in Japan in 1955, Fusae lived in Syracuse, NY with Jeff’s family while he was at sea, where she delivered her eldest of three daughters, Linda Fuji. In 1956, in Navy duty station Brooklyn NY, Fusae welcomed her second daughter, Nancy Marie, and shortly thereafter moved to Navy duty station Long Beach, CA. In CA, she experienced deep post war prejudice and ridicule as an Asian of Japanese descent, and as a mother of bi-racial children. It was at this time that Fusae took a deep interest in Soka Gakkei International – USA (Buddhism). In 1963, while the family was stationed in Yokosuka Naval Station, Japan, Fusae welcomed her third daughter, Michele Michi. Shortly thereafter the family rejoined her husband at duty station Taichung, Taiwan. In 1967, Fusae and the family returned to the U.S. to her husband’s last and final Navy duty station in Newport, RI and finally to hometown Syracuse, NY. As a result of her hard work ethic, persistence and determination, the family enjoyed home ownership for the first time in 1969. Fusae continued her passion for cooking and opened Fuji Restaurant in 1983 near the Syracuse University campus. Fusae was renowned for her cooking and could quickly whip up Asian, Italian and “Soul” food meals for friends and family. She is survived by her siblings in Japan and their progeny– Masahiro Fujihira (brother) in Tokyo, Yukiko Honma (sister)in Yamato, Suzue Fujihira (sister) in Yokohama, and Yasue Fujihira (sister) in Yokohama. Three daughters: Linda Jeffries Hammon of Herndon, VA; Nancy Jeffries (Robert) Sanders of Vallejo, CA; and Michele Jeffries Ortiz, of Charlotte, NC; and five grandsons: Justin Sanders, Joshua Kenneth (Caridaliza) Hammon, Chase (Kiah) Sanders, Jalen Ortiz, and Darien Ortiz; and one great grandson: Maylon Sanders. Fusae was interred at Owensboro Memorial Gardens in Owensboro, KY after a change from the original plan to inter her with her parents at the family plot in Yokohama, Japan. Special thanks and blessings to: - The Heritage Fellowship Church family for continuous encouragement, fellowship and prayer support - Grace Jorgbor, an angel brought from God, to care for Sy in the home for 3 months - Joe Huang, for his beautiful gift of special music on his acoustic guitar - Elizabeth Myers, and her sacred dance team for the performance of “Better” by Hezekiah Walker - The staff at Capital Caring, Aldie VA and Brookdale Senior Living of Sterling VA. Haiku: (n) a Japanese poem of seventeen syllables, in three lines of five, seven, and five, traditionally evoking images of the natural world.

The family of Fusae "Sy" Fujihira Jeffries created this Life Tributes page to make it easy to share your memories.

Send flowers to the Jeffries family.