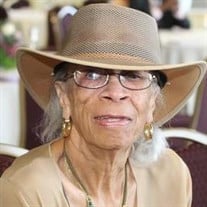 Mrs. Gloria Etta Talbott Hicks went home to glory, Sunday morning, November 25, 2018. She left this world peacefully in her sleep, surrounded by family. She was born June 7, 1929 to Grant and Gertrude Talbott in Owensboro, Kentucky. Her husband, Granville Hicks, and parents preceded her in death along with siblings Grant G. Talbott Jr., Ethel T. Smith, Mae V. Talbott, Maxine E. Johnson, John T. Talbott and Creasie Rose Smith. Gloria attended high school in Owensboro, KY and went on to college at Tennessee State University where she received her Bachelors of Education. She also received her Masters of Education from Indiana University. As an educator, Gloria spent time teaching in Florida, Hawaii and Puerto Rico while her husband served in the United States Army. After moving to St. Louis, she joined the East St. Louis School District, where she served her students and community for almost 40 years. Gloria was a member and an elder at Centennial Christian Church, in St. Louis, Missouri for over 50 years. She also served on the finance committee and was a member of the choir. Gloria was also an active member of Alpha Kappa Alpha Sorority, Inc. for over 60 years, serving in many positions of leadership throughout her tenure. While Gloria enjoyed teaching and serving in the community, she also engaged in many social activities. Gloria was an avid bridge aficionado and played at least twice a week at the Wohl’s Recreation Center in St. Louis, Missouri. She also traveled around the country, playing bridge. She was also an expert scrabble player and showed no mercy to her nieces and nephews. In her family, learning to read and write meant learning to play scrabble. Gloria was a rare jewel, an angel living among us. She is survived by her brother, William L. Talbott (Hazelene) and her two sisters, O. Josephine T. Rowan and Sallene A. Lockett, along with a host of nieces and nephews. Graveside Services and burial will be 1:00 p.m. Monday, December 3, 2018

The family of Gloria Etta Talbott Hicks created this Life Tributes page to make it easy to share your memories.