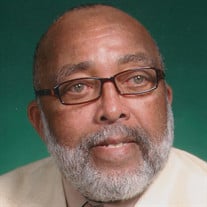 Herschel Morrow of 4108 Benttree Drive, #A, Owensboro, KY, went to be with the Lord 1/3/2015. He was 69 years old, born in Daviess County on December 18, 1945 to Willie Mae Norris and Horace Morrow, both preceded him in death. He was also preceded in death by two sisters, Gracie Holt and Carolyn Cooper Barnes. Herschel attended Western High School and graduated from Owensboro High School in 1964. Upon graduation he joined the military and served six years in the Army as Staff Sergeant in Korea and Vietnam. He received an Honorable Discharge in 1970. Herschel worked for the Defense Department, Arsenal Division, in Albany, NY, and retired from the United States Postal Service for a total of 30 years of service in the government. He also retired from United Airlines after working part-time for seven years. Herschel gave his life to the Lord early on in his life. He loved to travel and wherever his travels led him he always found himself a church home. He was a member of St. Paul A.M.E. Church in Owensboro. When he relocated he joined Bethany Baptist Church in Albany, NY, where he was ordained as a deacon in July, 1994. In 1998 Herschel moved to Los Angeles, CA and joined Grace United Methodist Church. He was an active member of the United Methodist Men Group, Men’s Choir, Men’s Usher Board and Pastor Parrish Relations Committee. After retiring, Herschel moved back home to Owensboro and joined Asbury United Methodist Church and continued his service to the Lord until his death. Herschel leaves to mourn his death one son, Damian Demond Morrow of Evansville, IN; one daughter, Alexis Michelle Morrow of Kalamazoo, MI; mother of his children, Charmaine Dugger of Minnesota; a host of grandchildren and great-grandchildren; three brothers, Bobby (Mary Helen) McCormick; Charles Edward McCormick (Renee Menfee) both of Owensboro, KY, and Herman (Renee) McCormick of Evansville, IN; one sister Barbara Joann Winstead of Owensboro, KY; his partner, Connie Leake of Owensboro, KY and a host of nieces, nephews, cousins and friends.

Herschel Morrow of 4108 Benttree Drive, #A, Owensboro, KY, went to be with the Lord 1/3/2015. He was 69 years old, born in Daviess County on December 18, 1945 to Willie Mae Norris and Horace Morrow, both preceded him in death. He was also... View Obituary & Service Information

The family of Herschel Morrow created this Life Tributes page to make it easy to share your memories.

Send flowers to the Morrow family.