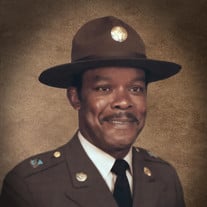 JB Tandy, 87 received a visit on Saturday, October 27th, at the Heartford House of Owensboro and heard a whisper in his ear, “You are closer to my home than yours, so come on home with me.” We believe that the Lord ushered him to his glorious new home. The son of the late Rev. Garfield T. and Beatrice B. Tandy, JB Tandy lived an exemplary life. He was a member of the Tenth Street Missionary Baptist Church where his father served as a former pastor and, until the day of his death, was a strong and faithful church supporter. He was the oldest member of the Church and throughout his over 50 year membership, JB served in numerous church capacities including Sunday School teacher, choir member, treasurer, trustee — and the one of which he was the most proud, a dedicated deacon. JB graduated from Western High School and Barbering School in Paducah, Kentucky. He was retired from General Electric and the Army Reserves. He spent most of his adult life working as a machinist at General Electric. He also faithfully served his country as an armored tank driver (1951-1953) and, for 37 years, was a Drill Sergeant with the 100th division of the Army Reserves. For many years, he marched as a Color Guard in the Owensboro Christmas Parade. In addition to being a Boy Scout leader, JB was the owner and operator of the Arcade Barber Shop for more then fifty years. He loved old cars and as an antique enthusiast, he enjoyed collecting items such as antique furniture, dishes and clocks. But his pride and joy was his radio collection, several of which were featured in the movie, A League Of Their Own. He was the recipient of the Rev. George Riley “On The Battlefield” Award in 2012 by the Men’s Mass Community Choir and this year received a 50-year membership award from Mt. Pisgah Lodge #20. His Masonic membership included Mt. Pisgah Lodge #20 (past Master) and Cawthar Temple #118, Evansville, a noble of the mystic shrine. He enjoyed attending gatherings of the Antique Car Club, General Electric Retirees and Western High School Reunion Planning Committee. He also was preceded in death by his siblings, Joe Henry Tandy, Glasper B. Tandy Lowery, William B. (Big Brother) Tandy, William Garfield (Baby) Tandy and Fred Lee Tandy. Those left to carry on his legacy are his brothers, Charles Tandy of Columbus, Rondalis Tandy of Los Angeles, and Samuel Tandy, his sister-in-law, Rosie Tandy of Owensboro, and numerous nieces, nephews, cousins, former customers and special friends. Last Rites given by Mt. Pisgah Lodge #20 and Cawthar Temple # 118, Friday at 7:00 PM. Burial in Owensboro Memorial Gardens with Military Honors. McFarland Funeral Home entrusted with final arrangements. Online condolences may be made at www.mcfarlandfh.com Family request in lieu of flowers that donations be made to Hospice of Western Kentucky “The Heartford House”.

JB Tandy, 87 received a visit on Saturday, October 27th, at the Heartford House of Owensboro and heard a whisper in his ear, &#8220;You are closer to my home than yours, so come on home with me.&#8221; We believe that the Lord ushered him to... View Obituary & Service Information

The family of JB Tandy created this Life Tributes page to make it easy to share your memories.

Send flowers to the Tandy family.