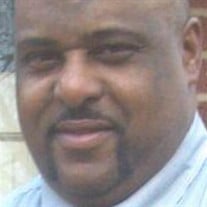 Rev. Jeffrey "Scott" Goodwin, 47 of Owensboro transitioned from his earthly dwelling place to eternal life on Tuesday, June 13, 2017 at the University of Kentucky Medical Center. He was born November 26, 1969 to Donald and Loretta Goodwin. He graduated from Owensboro High School and was a proud member of the Owensboro High School Red Devils 1986 Class AAA Championship team, starring as an outside line-backer and fullback. He was an Associate Minister, Sunday School Teacher, Youth Leader and Choir Director at the Tenth Street Missionary Baptist Church and was employed by The Arc of Owensboro. The Arc of Owensboro has been advocating for, and working with, people who are disabled and their families for nearly sixty years. He was the most content when he was reading God's word, singing, worshipping and sharing love with family and friends. Rev. Scott was blessed with numerous gifts, but his gift of offering words of comfort and encouragement to others made a difference in the lives of countless others fortunate enough to cross paths with him. He was preceded in death by his grandparents, Bishop and Georgia Lindsey and Birdie and Remus Goodwin and his nephew, Joshua Stewart. Surviving to cherish his memory and remember his love are his two daughters who caused his eyes to sparkle, Brittany LeShawn Porter and Madison Michelle Lindsey Porter; their mother, Jodi Porter; a grandson who caused his heart to be full, Berkley Scott Porter; his fiancé, Kathy Calloway; three sisters, Monica (Garnett) Mundy, Lorita (William) Clemmons, and Veda(Keith) Stewart; numerous family, friends and members of the Tenth Street Missionary Baptist Church. As his family, friends and members of the household of faith share memories of his life, everybody agrees there will never be another Rev. Scott. He was the real MVP!

Rev. Jeffrey "Scott" Goodwin, 47 of Owensboro transitioned from his earthly dwelling place to eternal life on Tuesday, June 13, 2017 at the University of Kentucky Medical Center. He was born November 26, 1969 to Donald and Loretta Goodwin. He... View Obituary & Service Information

The family of Rev. Jeffrey "Scott" Goodwin created this Life Tributes page to make it easy to share your memories.

Send flowers to the Goodwin family.