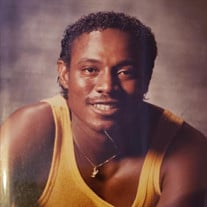 Leon “PeeWee” Griffith, 63, of Louisville, KY has gone to be with the Lord on Thursday, January 21, 2021, at the Norton Hospital. He was born August 1, 1957 to the late Robert Smith and Laura Mae Griffith. He was a devoted member of the Seventh Day Adventist Church in Louisville. He is a Graduate of Owensboro High School, Class of 1976. Leon was employed with the city of Owensboro for 18 years. He was an avid fan of University of Louisville Sports, NFL San Francisco 49ers, and the Owensboro Dust Bowl. He enjoyed working crossword puzzles and spending time with his family. In addition to his parents, Leon was proceeded in death by his sisters, Mary Glory, Georgia Lee, Laura Ann Griffith and brothers, Sherman “Bull” Smith, James “Smokey” Smith, Larry Wayne Griffith and Herman Joe Smith. Leon leaves to mourn his loss, a loving niece Lavern (Rippo) Hinton; sister Dorothy Griffith; brothers William Earl Griffith, Michael Smith, and Little Robert Smith, Jr., along a with host of nieces and nephews and cousins. Services will be Monday, January 25, 2021 at noon. Visitation 11:00 am – 12:00 noon at McFarland Funeral Home, Inc. Burial at Memorial Gardens. The number of those attending the funeral service for Mr. Griffith shall be within current health and safety directives. Final tribute entrusted to McFarland Funeral Home, Inc. Condolences may be made online at www.mcfarlandfh.com.

The family of Leon "PeeWee" Nathaniel Griffith created this Life Tributes page to make it easy to share your memories.

Send flowers to the Griffith family.