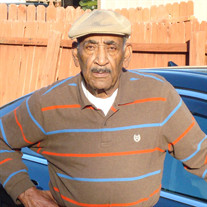 Mahlon Russell Jeffries March 9,1929 - May 11,2018 (Age 89) Mr. Jeffries was born in Farrell, PA on March 9, 1929, the only son and 2nd youngest of 7 children. Mr. Jeffries joined the U.S Navy at the age of 17 from Syracuse, NY. He is believed to be one of the first African-Americans to attend the United States Naval Training and Distribution Center - Camp Peary in Williamsburg, VA, prior to the Supreme Court decision to integrate the armed forces on July 26,1948. His career included completing a Marine Corps course in penal corrections, and serving as an Officer's Candidate School instructor at Newport, RI. He was aboard the USS Maddox, when it was under a three-day siege in the Gulf of Tonkin. He and other crew members received decorations following the attack, which led to American involvement in the Vietnam conflict. He retired after serving 24 years as a Boatswain Mate Chief Petty Officer. He served on eleven ships during those 24 years. In 1969, Mr. Jeffries returned to Syracuse, NY. He took a position at the New York State County Court where he was a court attendant for 6 years until being promoted to court clerk where he kept court records, administerd oaths to witnesses and defendants, and drew names of prospetive jurors. He retired after 21 years of service. Mr. Jeffries was believed to be the first African American to be appointed clerk to a judge of a County Court or State Supreme Court. He held at one time three jobs including his own part time carpet cleaning business (MRJ Carpet Cleaning), but still managed to have the best lawn on the block. He was a great gardener during this time and had a beautiful large vegetable garden and grew many things that he shared with family and friends. After retiring from the State of New York, he moved to Orange Park, FL in 1992 where he continued to enjoy landscape gardening, washing and waxing his car, and working out regularly at the gym. He married Fusae Fujihira of Yokohama, Japan from 1954-1983. They had 3 daughters. He married Euridee Washington of Cleveland, Ohio from 1983-2000. He is survived by his 2 siblings: Fay Tucker of Syracuse, NY and Iva Harlow of Atlanta, GA. Three daughters: Linda Jeffries Hammon of Herndon, VA; Nancy Jeffries Sanders of Vallejo, CA; and Michele Jeffries Ortiz, of Charlotte, NC; and five grandsons: Justin Sanders, Joshua Kenneth Hammon, Chase Sanders, Jalen Ortiz, and Darien Ortiz; and one great grandson: Maylon Sanders. A graveside service with honors will be held on Friday, June 1, 2018 at 2:30 p.m. at Jacksonville National Cemetery, 4083 Lannie Road, Jacksonville, FL 32218. Services entrusted to Aaron and Burney Bivens Funeral Home, 529 Kingsley Avenue, Orange Park, FL 32073.

The family of Mahlon Russell Jeffries created this Life Tributes page to make it easy to share your memories.

Send flowers to the Jeffries family.