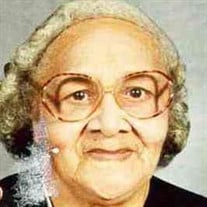 Mary Elizabeth (Black) Smith, 90, of Springfield, Ohio passed away October 2, 2016. She was born April 17, 1926 in McHenry, Kentucky a daughter of William Buell and Betty Ann Black. Mary received the Holy Ghost at the age of 12 under the late Bishop, Pastor T. H. Demmings, in the Church of the Living God Pillar and Ground of Truth in Owensboro, Kentucky. Mother Smith loved music and had an ear to hear music in the spiritual realm. Her desire to please God with her gift prompted her to begin strumming the sound of music on the window seals. She would often say that it was just 80 pieces of wood as she smiled. In 1950, Mary was united in marriage to Johnny Lee Smith and to this union two sons were born, Robert and David Smith. In 1975, Mother Smith moved to Springfield and became a member of the Church of God Militant Pillar and Ground of the Truth under the leadership of the late Pastor Bishop Charles O. and Evangelist Betty Spurling. She began to work out her soul salvation with fear and trembling as the church pianist where she was an active, devoted and faithful servant until the day she died. Mother leaves to cherish her memory two sons, Robert (Connie) Smith of Dayton, Ohio and their children and David (Christine) Smith of Antelope, California and their children; a beloved daughter, Pastor Hattie Millender who loved and took care of her for almost two years; a very special cousin, 88 year old Isabelle Amos of Owensboro, Kentucky; her loving and devoted goddaughter, Kay "Baby Kay" and husband Ronald Miller, who took her in and took care of her for 11 years; a special god-grandson, Elder Anthony (Stephanie) Millender and family; loving grandchildren, Chris (Tonya) Miller, "O" and Semi Miller, Michael (Johnny), Stacy Miller, Michelle (Jayson) Thompson; four grandchildren, four great grandchildren, three spiritual grandsons, three spiritual granddaughters and a host of nieces, nephews, other relatives and friends. Mother was preceded in death by her parents; two brothers, Charles and Herman Black and a sister, Bertha Mae (Black) Buffington. Visitation is Saturday, October 8, 2016 from 11AM until the time of service at 1PM in the Church of God Militant Pillar and Ground of the Truth Church, 1179 Rosedale Ave Springfield, OH 45506. Burial is Monday, October 10, 2016 at 10AM in Ferncliff Cemetery 501 W. McCreight Ave Springfield, OH 45504. Arrangements by the Robert C. Henry Funeral Home.

Mary Elizabeth (Black) Smith, 90, of Springfield, Ohio passed away October 2, 2016. She was born April 17, 1926 in McHenry, Kentucky a daughter of William Buell and Betty Ann Black. Mary received the Holy Ghost at the age of 12 under the late... View Obituary & Service Information

The family of Mary Elizabeth Smith created this Life Tributes page to make it easy to share your memories.

Send flowers to the Smith family.