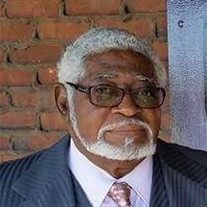 Melvin J. Smith Sr., 78 of Owensboro, KY, passed away Sunday morning, August 7, 2016, at Mercy Hospital and Medical Center in Chicago, IL. He was born in Owensboro, KY on September 4, 1937. Son of the late Jessie Mae Douglas and late step-father Robert Douglas of Owensboro, KY, son of the late Herman Smith and step-mother Lynette Smith of Indianapolis, IN. He was the oldest brother of the late William Finny Douglas, Harold Douglas, Eugene Douglas, and Robert Moe Douglas. He graduated from Western High School, Owensboro, KY in 1957 and attended Tennessee State University. He retired from Green River Steel Corporation after 25 years of outstanding service. He was a member of the Mt. Pisgah Lodge #20, a 20 year member of the Owensboro Metropolitan Planning Commission, a member of Green River Area Development District, and a lifetime board member of the H. L. Neblett Center. He was also a Past Potentate of Evansville Cawthar Temple A.E.A.O.N.M.S. Shrine and Past Worthy Patron of the Order of the Eastern Star. Melvin had many years of dedicated service at 10th St. Missionary Baptist church, where he served as the head treasurer, Deacon, and a member of the both the Mass and Men’s choirs. He enjoyed singing, music, fishing, hunting, and staying up to date with the latest technology. He was actively involved in attending his grandchildren and great-grandchildren’s extracurricular activities. He lived his life with passion, and compassion and had love for his faith in God, his family, and all the lives he touched. He is survived by his wife Doris J. Smith of 58 years; his four children, Yulanda Smith Williams (Jacques), Zelda Smith Crenshaw, Melvin Smith Jr. (Beth) and Darice Smith Johnson (Jerry); three siblings, Carl Lee Douglas and David Douglas of Owensboro, KY, and Gwen Black of Indianapolis, IN; sixteen grandchildren, 28 great-grandchildren, and several nieces, nephews, and cousins. Funeral services are at 11 a.m. Saturday at Tenth Street Missionary Baptist Church. Visitation is from 9 to 10:30 a.m. at the Church with Masonic services at 10:30. Burial is at Rosehill-Elmwood Cemetery. McFarland Funeral Home is in charge of arrangements. Condolences may be made at www.mcfarlandfh.com.

The family of Melvin J Smith Sr created this Life Tributes page to make it easy to share your memories.

Send flowers to the Smith family.