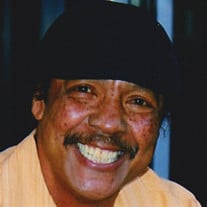 Michael A. Black, Sr., of Owensboro, KY passed away at his home on Thursday January 01, 2015. He was 61 years old. Michael was employed at Swedish Match Leaf and was a former member of The Soul Walkers and Soul Sensations Band. He was also... View Obituary & Service Information

The family of Michael A. Black created this Life Tributes page to make it easy to share your memories.

Michael A. Black, Sr., of Owensboro, KY passed away at his home...

Send flowers to the Black family.