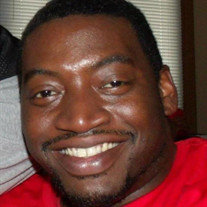 Patrick Ricks Dean (Pat) was born on February 7, 1979, in Owensboro, Kentucky, to his parents William McCoy Dean Jr. (Pete) and Gloria Jeanette Ricks Dean. He was preceded in death by his father, Pete, grandparents, William M. Sr. and Francis Brown Dean, Rev. C.N. and Annie Carley Ricks, and his beloved dog, Earl Dean. He graduated from Owensboro High School in 1997, where he was a member of the Red Devils football team. He later attended both Western Kentucky University and the University of Louisville. We know that Pat loved the Lord, gave his life to Christ, and was faithful in service to our Creator. He worked as a server at Olive Garden for eleven and a half years and at Legends Sports Bar & Grill, for two years. Pat was highly regarded by employers, coworkers, and customers for his professionalism and his warm, engaging manner in heightening his customers’ dining experience. One manager stated that if her son turned out to be half the man Patrick was, it would be her greatest joy. Pat was an avid gamer, an activity he shared with his “crew”, family, and friends. He was a people person and never met a stranger. He was into having fun and there was not a roller-coaster he didn’t like, the bigger, the better! To say he liked food would be an understatement. He was great at reading people and knew when you needed a laugh, even if he had to clear the room to get one. He leaves to cherish his memories his mother, Gloria Dean; two sisters, Shannon M. Dean and Jennifer Dean Hardin (Hadji), and a brother, Josh Travis Taylor (Alpha); three nieces, Jenee Hardin, Arianna Taylor, and Mina Grieco; four nephews, Jalen Taylor, Jaylon Dean, Isaiah Hardin, and Mikey Grieco; his adopted family, Robert, Angela, and Taylor Hardaway; uncles, Claude “Uncle Bud” Ricks, Vernel “Uncle Bubby” Dean (Fay), and Dennis Dean (Michelle); aunties, Helen Hines, Anna Peyton, Carrie Boachie, and Anna Dean; as well as a host of cousins, close relatives, and friends.

The family of Patrick Ricks Dean created this Life Tributes page to make it easy to share your memories.

Send flowers to the Dean family.