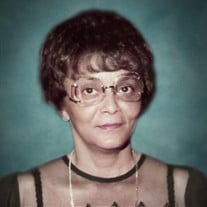 On March 17, 2018 at approximately 9:46 a.m. at her daughter&#8217;s home, Sara Gray Winstead Grundy surrendered her final battle and peacefully went home to be with her Lord and Savior Jesus Christ. Sara was the fourth child born to the... View Obituary & Service Information

The family of Sara W Grundy created this Life Tributes page to make it easy to share your memories.

Send flowers to the Grundy family.