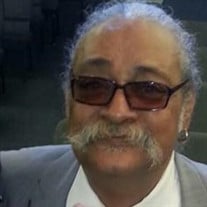 Stephen “Stevo” Ray Maddox, 61, died on January 20, 2016 at home. He was born the second son of the late William “Bill” and Elnora Maddox on October 15, 1954 in Owensboro, KY. He accepted Christ, was baptized; became a member of Fourth St. Baptist Church at the age of 12 and served on the Junior Usher Board. As a youngster, he played youth football and baseball. He attended Western-Goodloe Elementary School and Foust Junior High School. He is a 1972 graduate of Owensboro High School, a proud member of the OHS 1972 State Basketball Championship Team. He was team captain. He attended Eastern Kentucky University and Mercer College in Macon, Georgia. He was previously employed at Chautauqua Youth Center and General Electric Company and Ragu Foods. He was an avid sports fan. His favorites were the University of Louisville Cardinals, the Los Angeles Lakers, the New York Yankees, the North Carolina Panthers and Tiger Woods in golf. He worked with the Owensboro Dust Bowl for 42 years. He was a devoted reader of the Messenger-Inquirer daily. He enjoyed cooking, barbecuing and entertaining his countless number of family and friends. He was also preceded in death by 3 brothers and a sister. He leaves to mourn the loss of his passing, a loving wife of 31 years, Fong Lee Maddox, 2 sons, Rocky Raynard (Brittany) Maddox and Julius Garcia (Heaven) Maddox, 6 grandchildren, a sister, Sharon (David) Kelly, an aunt, Bernice Thompson, and a mother-in-law, Elois Murphy; a special daughter, Melissa Ezell, all of Owensboro; an uncle, Winston Guynn of Kokomo, IN; a host of nephews, nieces, cousins, other relatives and friends. Services are Saturday at 1:00p.m. at Fourth Street Baptist Church. Visitation will begin at 10:00a.m. to 12:30p.m. at the church. Burial at Owensboro Memorial Gardens. McFarland Funeral Home is in charge of arrangements.

The family of Stephen "Stevo" Ray Maddox created this Life Tributes page to make it easy to share your memories.

Send flowers to the Maddox family.