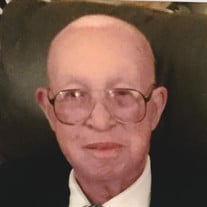 W. A. Howard was born on August 13, 1918. He was the second son and fifth child of the six children born to the late Eddie Emitt Howard and Georgia Cooper French Howard. While he was growing up and helping on the family farm, W.A. also received his education at the Rosen Wald School located in Pleasant Ridge, KY. W. A. accepted Jesus Christ as his personal savior at a very young age and was baptized at his church, Pleasant Point Missionary Baptist Church. On January 16, 1942 at the young age of 23 ½ years old, W. A. was drafted into the United States Army for a 4-year term of duty during WWII. However, in December of 1945, the Lord blessed W. A. to receive an honorable discharge and return back home unharmed to Pleasant Ridge, KY. In 1948, W. A. and Edmonia Shivley were united in marriage. Later a son, Charmlin Leslie Howard, was born. Eventually they divorced. Years later, W. A. met Modestine Deal Bibbs and they married. From a previous marriage, Modestine brought a toddler daughter, Diann Bibbs, to their family. In March of 1958, a son, William Allen Howard, was born. Less than two years later in January 1960, a daughter, Brenda Carol Howard, was born. There last child, another daughter, was still born in June of 1961. W. A. was employed at General Electric Co. for many years and later retired from the Texas Gas Corporation. He also worked many second, part-time jobs throughout his life. W. A. truly enjoyed every minute of life, whether he was sitting on his porch talking with family and friends or doing something in his garage. One of his greatest joys was working in his yard, especially cutting the grass with his riding lawn mower. After he retired, he especially enjoyed watching old westerns on T.V. W. A. loved his church members and his pastor. He was a faithful, lifelong member and served as a trustee. He attended church regularly and drove himself until his health started to decline. Even then, family members would still bring him on occasions. His wife of 61 years, Modestine, preceded him in death on November 20, 2012. He leaves to cherish his memory; four children, Diann Bibbs of Owensboro, Charmlin (Sharilyn) Howard of Liberty Township, OH, William Howard and Brenda C. Howard both of Owensboro; seven grandchildren; ten great grandchildren; and four great-great grandchildren; one brother-in-law, Eugene C. Deal, Sr. of Owensboro; two sisters-in-law, Naomi Deal of Owensboro, and Shirley A. Clark of Evansville, IN; and a host of nieces, nephews, cousins and friends. Burial, with military honors provided by the US Army and VFW Post 696, at Pleasant Point Missionary Baptist Church Cemetery.

W. A. Howard was born on August 13, 1918. He was the second son and fifth child of the six children born to the late Eddie Emitt Howard and Georgia Cooper French Howard. While he was growing up and helping on the family farm, W.A. also received... View Obituary & Service Information

The family of W. A. Howard created this Life Tributes page to make it easy to share your memories.

Send flowers to the Howard family.