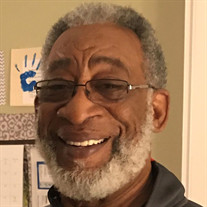 William McCoy (Pedo/Pete) Dean, Jr. was born November 24, 1948, to the union of William McCoy Dean, Sr and Frances Cecelia Brown Dean. He was preceded in death by his father and mother and a sister, Nettie Frances Dean. At an early age, Pete accepted Christ and united with First Baptist Church in Hardinsburg, KY, where he was a faithful member throughout his childhood and teenage years. On June 5, 1973, he was united in marriage to Gloria Jeanette Ricks. They moved to Owensboro, KY and joined the Calvary Temple church family. Pete, being a faithful willing servant of Jesus Christ, served his last years of worship with the family at Good Shepherd Church, where he was involved in the Jail & Prison Ministry. He also completed the Honor Bound Men of Champions course and received his sword. He loved going on mission trips to Belgium and Venezuela where he provided electrical services or anything else he was asked to do. Pete was educated in the Breckenridge County School System; attending Hardinsburg Elementary School, and graduating from Breckenridge County High School. He received an Associate Degree from ITT in September of 1969, in electrical engineering. Pete also was a member of the United States Coast Guard and was Honorably Discharged in December of 1982. He was a lifetime member of the Wise Owl Club of National Southwire Aluminum company, in Hawesville, Ky. He was then employed by Century Aluminum until his retirement, after 42 years of service, where he worked his way through the ranks to become the Maintenance General Supervisor. During these years, he owned P&G’s Laundromat in Hardinsburg, KY, and Pete’s Heating & Air Conditioning Business. “If You’re in the Heat, Call Pete”. Pete loved his community. He was involved in the NAACP, where he served in the office of treasurer. He participated in local elections, serving as an election clerk, and attended the first Million Man March in Washington, DC. Pete was a man of honor and character, who took family seriously. He was a man that could be counted on. His brothers and sisters knew that they could lean on him anytime. Indicating that Claude and Anna were simply his in-laws does not do justice to the bond they shared. He thought of them as his brother and sister and often introduced them as such. He loved all his nieces and nephews as his own children. Someone wrote – “You’ll never change your life until you change something you do daily. The secret of your success is found in your daily routine”. Pete believed there was a “quote” for every situation. He was an encourager who would often quote inspirational and motivational sayings. He took every opportunity to witness to others about the Lord. He loved talking to folks of all ages, never meeting a stranger. He was an active man. It was not uncommon to see him riding his bike around town, grinning at passers-by. He would go to Anytime Fitness and Planet Fitness when possible, wherever he could find one. He was a man into sports. The Louisville Cardinals, the Arizona Cardinals baseball team, and the Pittsburgh Steelers are his favorites. He was a traveler and took his wife and kids on many trips; they visited most of the states in the US, frequented amusement parks, and attended family reunions from Seattle, Washington, to St. Petersburg, Florida. He liked exotic foods: frog legs, alligator, shark, turtle. He would try anything. Pete was a grilling man who liked to eat out. He was a “cleanup man” if there ever was one. One of his favorite vehicles was a ’68 Chevelle. He was a vehicle man. He loved bikes, motorcycles, and his truck – “Big Luke”. He leaves to cherish his memory his wife of nearly 46 years, Gloria; three children: Shannon M. Dean, Jennifer Dean Hardin (Hadji), Patrick R Dean; three grandchildren: S. Jenee Hardin, Jaylon Dean, and H. Isaiah Hardin; his adopted family: Robert, Angela, and Taylor Hardaway; five siblings: Helen E. Hines, Vernell (Bubby) Dean (Fay), Carrie M. Boachie, Anna Faye Dean, and R. Dennis Dean (Michelle); his father-in-law, Rev. C. N. Ricks, one brother-in-law, Claude Ricks, one sister-in-law, Anna Peyton, and a host of nieces, nephews, cousins, close relatives, friends, and Earl Dean, the family pet.

William McCoy (Pedo/Pete) Dean, Jr. was born November 24, 1948, to the union of William McCoy Dean, Sr and Frances Cecelia Brown Dean. He was preceded in death by his father and mother and a sister, Nettie Frances Dean. At an early age, Pete... View Obituary & Service Information

The family of William "Pete" Dean created this Life Tributes page to make it easy to share your memories.

Send flowers to the Dean family.